Staff member
Note: This is about server mechanics, not the "rules" found in SoD's EULA!​
If you'd rather skim, just stick to the GREEN TEXT below.​
All EQ servers run on a table of settings called “server rules” (outlined here and here), which determine the major mechanics of a server. For instance, the MaxLevel rule in SoD presumably has an integer value of 65, capping everyone at that level. The CorpseDecayTimeMS rule in SoD is set to 10800000, causing player corpses to remain after death for 3 hours (10,800,000 milliseconds). And the ItemATKCap rule in SoD is set to 150, as seen on this Fomelo profile.

The majority of these rules are most likely in line with the staff’s vision of the server, but I have two hunches about some of them:
Changing server rules can bring about fundamental changes that would give many new conveniences to the player, and in many cases, such changes require nothing more than altering a single value in the database.

So, what would a server rule change look like?

Consider the UnmemSpellsOnDeath rule, which evidently is what wipes a character’s spellbar upon death. As far as I can tell, this rule didn’t even exist in the 2.0 client; back then, dying wiped spells no matter what because it was just part of the game design—a "fact of life." More modern clients seem to have an option here though, and changing UnmemSpellsOnDeath from TRUE to FALSE would take some of the hassle out of dying without unbalancing anything (since Death Fatigue prevents casting spells anyway once you respawn after death).

How do we know that changes to the server rule table are possible? Well, according to patch notes from January of last year, someone (I'm thinking @Slaariel) made it so players begin with max Sense Heading skill. And it just so happens that the 2.5 client has access to a rule called SenseHeadingStartValue (which 2.0 didn't have!). The dev in question almost certainly changed the value from 0 to 200 in the rule table, and in the blink of an eye, made everyone's life easier.

The Sense Heading change proves three things:
Therefore, I'm asking that the staff (e.g. The Big S and/or @Rymy) do a complete review of the server rule table to consider making changes that would make players' lives easier, make the game more enjoyable, and modernize SoD in order to improve its appeal among newcomers.

I don't have any way of knowing exactly what SoD's server rule settings look like, and it's entirely possible that some of these rules could unleash bugs. Regardless, here's a cursory list of some rules that might benefit from being reconsidered by the staff:
What are your thoughts on such changes, fellow players?

This would be absolutely amazing.

My thoughts on each:

Pretty great suggestions all around. Favorites being the hover on death feature and also unmem spells. Would be great for wizards since they always manage to get rezzed before they load their harvests.
One thing I was curious about was the autofollow feature. On other servers / clients I've used a /stick command which lets you set follow distance, follow angle (always in front of follow target, always behind, etc.).
I wasn't sure if this feature was even functional in our current client, but I know our implemented /follow feature has a variety of quirks to it that really make it frustrating to use sometimes.

I can't think of any realistic situation in which this could possibly be exploited to any practical effect against Adepts.


iBluNT said:
Pretty great suggestions all around. Favorites being the hover on death feature and also unmem spells. Would be great for wizards since they always manage to get rezzed before they load their harvests.
One thing I was curious about was the autofollow feature. On other servers / clients I've used a /stick command which lets you set follow distance, follow angle (always in front of follow target, always behind, etc.).
I wasn't sure if this feature was even functional in our current client, but I know our implemented /follow feature has a variety of quirks to it that really make it frustrating to use sometimes.
Click to expand...

Others are welcome to correct me, but I believe /stick at least originated as a MacroQuest 2 command (which would explain its efficiency). Maybe some servers found a way to adapt the MQ2 code to the game client itself, though I've never seen anything like that before. It would be wonderful to have it here.

Regarding autofollow's awfulness, I'm fairly sure that a common culprit is clientside FPS desync between boxes. In other words, if you set EQ to run at 30 FPS when active but minimum FPS in the background (a feature we didn't have in 2.0), one boxed character moves at 30 FPS while the other stutters along at, say, 5 FPS, which I guess leads to all sorts of location packet hiccups that autofollow can't deal with. In the past, I've had luck with setting active and background FPS to identical values for 2boxing in order to improve autofollow, but then you end up completely losing the benefit of being able to run the background box at minimum FPS. It seems you can't have the best of both worlds.

Makes sense - I always thought it was client side and not just an MQ2 macro. Main place I used it was on EZ Server briefly.

Even with fps synced for autofollow characters still pretty frequently like to take sharp turns, often off the sides of aqueducts.
H

Ovisha said:
Even with fps synced for autofollow characters still pretty frequently like to take sharp turns, often off the sides of aqueducts.
Click to expand...

This. and it seems like if I strafe at all with the lead char. (say, around a one of the glue-traps, a.k.a. trees), the follower arcs off maybe every time.

Never ask a shapeshifter to cuddle. Did you already forget what you woke up to last time you tried that line?! 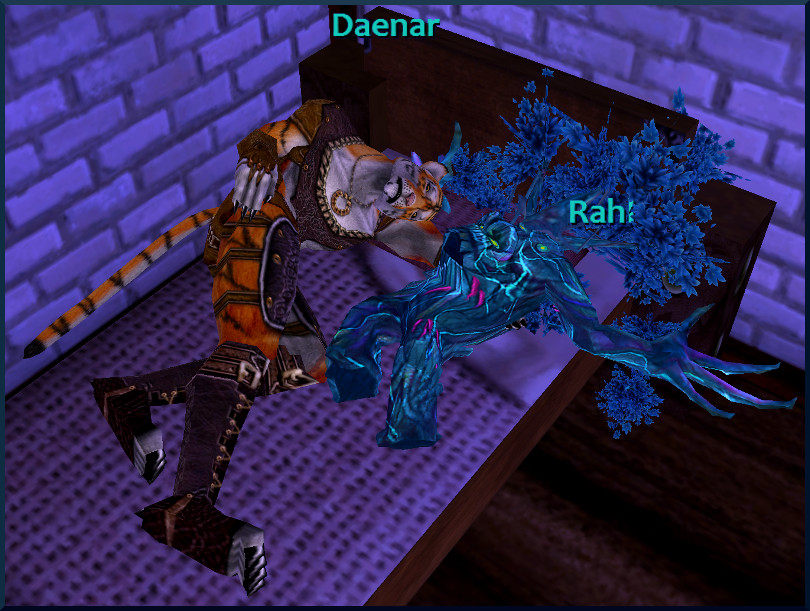 Staff member
The "Server Rules" don't do anything magical behind the scenes. They're just variables used in eqemu code to do things in server code. These are essentially just ways to control added features.
I tested some of them and they are decent feature requests.
UnmemSpellsOnDeath - This can be changed by just commenting out 1 line of code.
SoDClientUseSoDHPManaEnd - This is programatically a sidegrade so I didn't look into this.
TellQueueSize - This looks like a good feature to implement, seems pretty reasonable.
RespawnFromHover - This looks like it would take a bit of work to implement but a good feature too.

Didn't look into the rest really but none of them are "free" features.

Staff member
Thanks for looking at some of these, @Rymy. You're better equipped than I am to judge which ones are viable and which ones aren't. I look forward to seeing a couple of these things come to fruition in the future.

First choice would be getting tells or seeing messages I missed while zoning. That alone would be worth it. Personally I would like to float on death. It would be really helpful when taking new recruits to difficult or intricate fights because even if they die they at least get to see how to full fight runs. Third choice might be keeping spells mem'd on death but that is more QoL than anything else.

Bumping this thread, whatever came of these? Tell queue obviously never got added, but I noticed a few other quality of life elements we have now.
D

Yes please, and thank you.

Staff member
Unfortunately, Shards of Dalaya's build is far more Frankensteiny than I realized when I wrote this. While some things mentioned here have been achieved in one way or another (e.g., characters get full HP/mana/endurance on level up, the Find feature works, and memmed spells are retained after death), the remaining items in this list would either require an impractical amount of backend maintenance or are effectively incompatible with the current client.